School life: the good old days when life revolved our first crush, our dearest friends, people we dislike, people who dislike us, love-hate relationship with our teachers, and yes 1% exam ki tension. Rusk Studios and Binge’s latest release ‘Tuition Ke Baad’, captures the beauty of this phase of life in all its aspects. Centered around the loves and the lives of five 16–17-year-olds, this five-parter series is now streaming on Rusk’s entertainment vertical, Binge:

Here are a few aspects of the show that will make you want to binge watch it right away:

The show features four boys: Shole, Aashiq, Tantrik and Jhatterburg: played by a young cast of YouTube personalities and Instagram Influencers like Abhishek Kapoor and Sanyam Sharma. Created by Aakash Kumar and Kshitiz Sudhakar, the story revolves around Aashiq’s unrequited love for their batch’s sweetheart, Sneha. The four teens find themselves clashing with rival gangs, party bouncers, khadoos tuition teachers and ultimately the story culminates in them fighting among themselves for the love of Sneha. 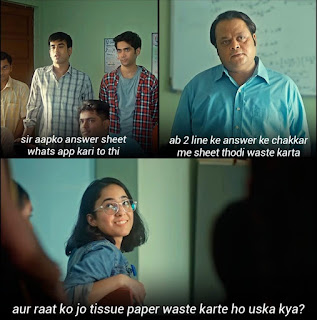 The plotline revolves around a complicated love triangle

The twist lies in Sneha falling for Aashiq’s best friend, Shole. At this point, the series becomes a clash between yaar versus pyaar. Written by Shivam Sharma, the eternal dilemma of choosing between the two is beautifully portrayed in the series. The show’s beauty lies in the perfect balance of light-hearted comedy and some intense life and death (or at least what may seem like that for a couple of teenagers) scenarios.

Another reason why Tuition Ke Baad makes for a great binge-watch is the on-point onscreen chemistry of the cast that the Director, Sumit Kumar, has brilliantly captured. Ritik Ghanshani – Ashiq whose love interest is Sneha played by Mugdha Agarwal; Sholay the aggressive one played by Abhishek Kapoor; Jhatterburg the level headed one played by Sanyam Sharma and Tantrik the superstitious one played by Suraj Bhan. Out of all the characters, Tantrik and Sneha’s sidekick, Chulbul are show-stealers. You would surely want to watch them more.

The quirky one-liners will have you laughing your heart out

The one-liners are very spontaneous, and you feel like using them during your daily conversations with your friends. Lines like “Mai raat ko darr ko sulake sota hoon” or “Sasti shaadi hai, paneer bhi nahi hoga khaane mein” are delivered with ease and will make you laugh.

So what are you waiting for? Go, relive your Tuition Ke Baad ke din and check out the show on Binge’s Youtube