‘The Naughty Twins’ land a role in ‘Kaun Banegi Shikharwati’

‘The Naughty Twins’ land a role in ‘Kaun Banegi Shikharwati’

by Dinesh Kumar
in Web Series
Reading Time: 2 mins read
A A
1
491
SHARES
1.4k
VIEWS
Share on FacebookShare on Twitter 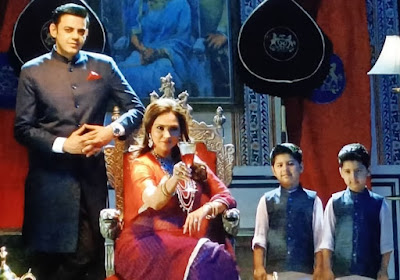 Jaipur : 6-year-old child artist, actor, and model Dhaneesh & Dhairyansh Gumber, twins originally from Jaipur debuted in the web-series, ‘Kaun Banegi Shikharwati’ as Aryan and Ayaan, two out of the four royal grandchildren of Naseeruddin Shah and sons of actress Lara Dutta who plays the role of Devyani Shikharwat Goel. For this Webseries, Casting of Twins done by Akshay Rawat.

Produced by Applause Entertainment & Emmay Entertainment, The series released on 7th January, 2022 features Naseeruddin Shah, Lara Dutta, Soha Ali Khan, Kritika Kamra, Raghubir Yadav and Anya Singh as the leading cast. ‘Kaun Banegi Shikharwati’ is about the lonely, broke overlord of Shikharwati, Raja Mrityunjay who is in debt of Rs 32 crores in wealth tax, which he is unable to pay. The king’s right-hand man who eager to protect the palace and Raja Mrityunjay, suggests that the monarch should call his daughters and announce the next heir to his throne and the complete property. As a result, whoever wins the crown will be responsible for paying the debts and would look after the 200-crore estate.With a YouTube channel of more then 11 thousand views the twins have achieved way more at this young age.

They have been guest celebrity in Rajasthan Kids Fashion Week and have been a part of various fashion shows and shoots. As young as they are, their biggest supporter and source of inspiration has always been their mother, Ishika Gumber who is a banker at SBI bank and Father Sandeep Gumber who is a businessman.

These young aspiring artists, values simplicity and wishes to be a successful actor in the future.

Aeshra Patel’s performance in upcoming series “Inspector Avinash” will blow your mind away!

With an impressive modelling career, Aeshra Patel who is one of the accomplished Indian Supermodels is now foraying into acting....

Season 2 of Netflix’s Jamtara is streaming now on Netflix. Directed by Soumendra Padhi, his most recent work has been...

The one important thing that holds us onto the melody is the lyrics. They play a very important role in...