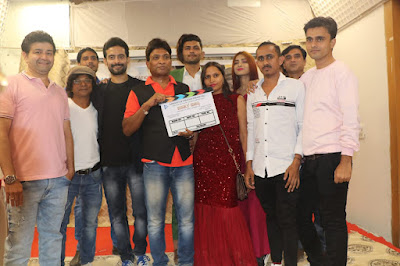 The grand muhurat of the web series Rishky Ishq was performed by the famous comedian and chief guest Sunil Pal at the Cuisine Hall of Mumbai. Producer Preeti Abhishek Jha’s web series will be released on OTT platform Cine Box Prime Original.
Actress Ruby Parihar and actor Sunil Kumar Ekathara will be seen in this thriller web series Rishky Ishq. The director of the film is Neeraj R Yadav. on this auspicious occasion Sunil Pal, Sahil Patel, Heiteal Punwala, Sonu Mishra and Kuldeep Singh were present among the guests. All the actors associated with this film were present.
The web series Rishky Ishq, which is being produced under the banner of Aarohi Film Creation, is written by Tauseef Alam, Siptain Raja. Its cinematographer is Abhimanyu Jha.
After giving the clip here, Sunil Pal told the media that I congratulate Preeti Abhishek Jha, the producer of this web series. In today’s era, web series has become a favorite entertainment tool of the audience, in such a situation, Preeti ji, despite being a woman, has come forward as a producer, salute to her courage.
Actor Sunil Kumar Akathara told that we will shoot this web series in Mumbai from 21st of this month and the release is planned by the end of March. This is the story of a couple. Wife’s affair takes place elsewhere. The story takes a turn when the husband comes to know about this. It will be quite exciting to see how the wife plots to kill her own husband.
Sunil Pal said that producer Preeti Abhishek Jha has made a great start. The title of the web series is quite attractive and its concept is also exciting. Audience will definitely like it.
Share196Tweet123Share49