Singing for me is worshiping and meditating,” says Esha Gaur

Singing for me is worshiping and meditating,” says Esha Gaur

by Dinesh Kumar
in Latest
Reading Time: 3 mins read
A A
0
491
SHARES
1.4k
VIEWS
Share on FacebookShare on Twitter 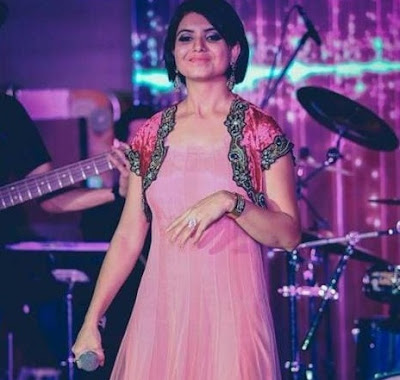 Hailing from the musical city of Varanasi which also happens to be the oldest city, singer Esha Gaur insists that her foray into the world of music was not a flash-in-pan decision, she says it that it’s her love and passion for music which is the prime factor that attracts her to be a part of the prestigious Indian Music Fraternity.
Esha’s first rendezvous with singing was as a toddler. She was around four years old when her mother discovered her knack for singing and found her a guru Dr. Parmananad Yadav who brushed up her gifted talent of raags. She was barely five years old when she gave her first performance for Shri Kumar Gandharv who was not only impressed with her singing but also asked her to pursue singing as a career.
She carved her name on the trophy of the very prestigious competition titled “Sangam Kala Group” on both District and National level in Filmi and Non Filmi chapter in 1994. Esha certainly left an impression on Kalyan Ji Anand ji that they invited her to Mumbai to learn singing from them. It was while training in Mumbai, she met superstar Govinda’s mother Smt.Nirmala Devi who blessed her and asked her parents to take her back to Varanasi so that she could focus on her music and academic career.
In Varanasi, Esha met Ustaad Ahmad Hussain and Ustaad Mohammad Hussain who took little Esha under their wings and gave her multiple platforms to showcase her talent. In 12th standard Esha took music as a subject and topped by scoring full marks in practicals which is a record till date and topped at District level from Sunbeam Varanasi and did Visharad from Banaras Hindu University.
After school she did her graduation and post graduation in music from SNDT University Churchgate and performed and won lots of awards.
By 2017, Esha has already established herself as a singer. She became the first choice of many music composers, singers and musicians. In 2017 she started her professional career with Ek Astha Aisi Bhi as a background scoring composer with her partner Puneet Dixit who was already working in films and television.
Apart from that she marked her brilliance in multiple projects like- Guddan Tumse Na Ho Payaga ( Zee TV), Namah( Star  Plus), Main Bhi Ardhangini ( &TV) , Vidya (Colors), Ram Pyare Sirf Humare ( Zee TV), Amma K Babu Ki Baby ( Star Bharat ), Apna Time Bhi Aayega ( Zee tv ), Excuse Me Madam ( Star Bharat ) , Belan Wali Bahu , Nath, (Dangal ) , Tera Mera Sath Rahe ( Star Bharat ), Aapki Nazron Ne Samjha( Star Plus ) and still counting. Together they created many original songs for TV for the first time in Television industry. They delivered some super hit tracks like Lakeerain and Ishq Nahi Aasan.
They have done a duet with Sonu Nigam which crossed million views and still getting the appreciation for the same from public. They created 8 original songs for a project for the first time in the history of TV and each song got millions of views “We try to do something different from others in every project.
As singer I have sung many songs for TV title tracks and theme songs too, right now we are coming up with some old thumri with new fusion style in a album songs recreated by Puneet and I have sung the tracks and acted too. We shot a song in Jaipur which will soon be ready to release. Right now we are working on 3 TV projects- Aapki Nazron Ne Samjha, Apna Time Bhi Aayaga & Nath”
Share196Tweet123Share49