Salman Khan and Katrina Kaif are back with “Tiger3”

Salman Khan and Katrina Kaif are back with “Tiger3” 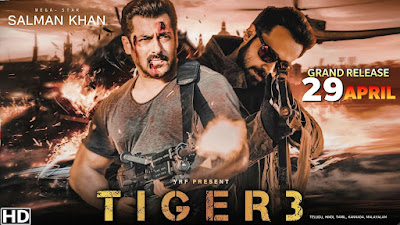 The clip begins with Katrina Kaif performing some high-octane actions. However, seems like fans cannot get enough of Katrina Kaif in the teaser. The energy and courage with which Katrina is performing the action sequence has left netizens completely impressed.

Social media is flooded with fans praising Katrina’s efforts. Talking about Katrina Kaif, she was last seen in Sooryavanshi along with Akshay Kumar. On the personal front, she tied the knot with Bollywood actor Vicky Kaushal in December last year.

Their wedding ceremony took place in Sawai Madhopur, Rajasthan. ‘Tiger 3’ is the third sequel in the ‘Tiger’ franchise directed by Maneesh Sharma. The first instalment ‘Ek Tha Tiger’ directed by Kabir Khan released in 2012. The second ‘Tiger Zinda Hai’ released in 2017 and was directed by Ali Abbas Zafar. the duo have co-starred in films such as Ek Tha Tiger, Tiger Zinda Hai, Maine Pyaar Kyun Kiya and Partner among others. Salman Khan even made guest appearances in several films which featured Katrina.

The duo were last seen together in the 2019 film Bharat. Tiger 3 is the sequel to Ek Tha Tiger and Tiger Zinda Hai. In the films, Salman Khan plays the role of an Indian spy named Avinash Singh ‘Tiger’ Rathore. However, he soon falls in love with a Pakistani spy named Zoya Humaimi (essayed by Katrina Kaif). Fans are waiting for the date to watch duo.

A source close to the film confirmed that Emraan will play an ISI agent in Tiger 3. He will be pitted against Salman Khan, who essays the role of RAW agent Avinash Singh Rathod. Interestingly, Katrina Kaif’s character in the film, Zoya, is also an ISI agent. It is likely that Tiger 3 is going to be a cat and mouse chase between Indian and Pakistani intelligence agencies.