PRO Naghma Khan was honored with the Mid Day Showbiz Award at the hands of Vivek Oberoi and Daisy Shah, in Dubai

PRO Naghma Khan was honored with the Mid Day Showbiz Award at the hands of Vivek Oberoi and Daisy Shah, in Dubai 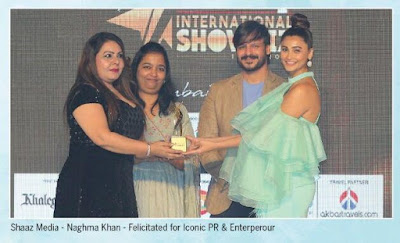 Naghma Khan , Founder & CEO of Shaaz Media Entertainment was awarded with The Iconic PR & Entrepreneur Award which was presented by Bollywood Actress Daisy Shah in the presence of Bollywood Actor Vivek Oberoi at the Midday Showbiz Award,  held in Dubai .
Naghma Khan hails from the Royal family .A daughter of Nawab from princely state of Tonk Naghma is the founder and Managing  Director of Shaaz media entertainment Pvt ltd company which is an popular one stop destination for Publicity, events and media production.
Naghma also happens to be one of the directors of an enterprising and growing OTT  Entertainment platform ‘Talkiez’ .
A woman entrepreneur Naghma has her businesses in the field of fisheries at Bengaluru and Chennai too and has already ventured into Film production and churned web series and content on MX Player platform as a ‘Producer’.
To name a few Naghma has produced System update , Dracks and ducks  which is   presently streaming on MX Player (OTT Platform) and the social drama ‘ Bhumi’ which is slated to release soon.
Having presided numerable sporting events under her Shaaz media entertainment banner  Naghma is credited for the most talked International MMA event  headlined  by legendary Boxer Mike Tyson .
Khan is also the official spokesperson of the president of Republican Party of India  and Cabinet minister for Social Justice and Empowerment Shri. Ram Das Athawale .
A staunch social reformer Naghma to conclude also supports social causes and NGOs .
Share196Tweet123Share49