by Dinesh Kumar
in Latest
Reading Time: 3 mins read
A A
0
491
SHARES
1.4k
VIEWS
Share on FacebookShare on Twitter 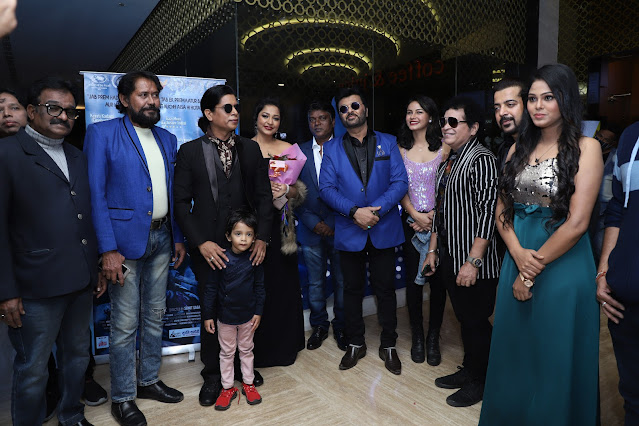 Ramesh Gupta and many more director, producer, financier, cinematographer etc. Bollywood has opened the doors for realistic cinema and one  such film Premaatur is all set for its released.Prashant Walde’s film Premaatur  has a catchy music and drama.
Premaatur starring Shah Rukh Khan’s body double Prashant Walde and Heta Shah in lead roles is a scintillating tribute to Shah Rukh Khan’s romantic films. Premaatur is a haunted love story. Rahul (Sriraj Singh) and Sonia (Kalyani Kumari) move to a city in Uttar Pradesh to live in a big palace. Sonia realizes the supernatural power surrounding this palace. Sonia feels that all is not well. Arjun (Prashant Walde) and Pooja (Heta Shah) live in another part of the palace. Meanwhile, many mysterious incidents happen with Pooja and Arjun is quite mysterious. Rahul and Sonia try to befriend Pooja and Arjun but Arjun yells at them in a very bad way. Conversing with a balloon vendor in town, Rahul and Sonia come to know about a ghost who kills the women by cutting them off. Meanwhile, Sonia goes missing from the palace one day, and a mysterious Baba warns Rahul. Arjun is madly in love with his wife Pooja. A big twist comes in the story when Arjun’s friend Vikram (Shantanu Ghosh) comes into the love story of Arjun and Pooja. There are many shocking twists in this story of Arjun and Pooja’s love.

In this Prashant Walde’s film, you will get to see the journey of Shah Rukh Khan in the cinema and the audience will remember many scenes and plots of the film like Darr, Anjaam, and Hum Dil De Chuke Sanam but at the same time, the film surprises you also. Prashant Walde has created thrill and suspense in the screenplay and story of the film.

Talking about acting, Prashant Walde is Shahrukh Khan’s body double, ofcourse, Shah Rukh’s style will be seen in his acting. But on screen, he has been able to present the character of Arjun in a whole new way. Pooja’s love is seen in his eyes. Heta Shah’s performance in the role of Pooja is also impressive, Kalyani Kumari is attractive in the role of Sonia, and Shantanu Ghosh looks impressive in the role of Vikram Singh in the film.
The most important aspect of the film is its music. The first song of the film “Jindagi Jeene Ka Tum Sahara Ho” is a very romantic song, in which the chemistry of the romantic pair of Prashant Walde and Heta Shah is seen on the screen, the second song “Ruthi Ruthi jindagi Ko Manau Kaise” a light moment song and “Aj Hosh Me Na Rahooon tu muze Pyar de etna” is also a romantic song. The film also has a high voltage Tandav song which is in the background in the climax scene of the film.

Produced under the banner of Anugrah Entertainment, Premaatur is directed by Sumit Sagar. Premaatur will feature Prashant Walde along with Heta Shah, Kalyani Kumari, Sriraj Singh, Shantanu Ghosh, Amit Sinha, Veer Singh, and Bindhya Kumari in various roles. It is produced by Prashant Walde and co-produced by Shantanu Ghosh, Satya and Pravin Walde. The screenplay and dialogues of the film have been written by Prashant Walde. Music and Lyrics by Aati kya Khandala fame Nitin Raikwar, Background score by Arsalan Sheikh and cinematography by Pappu Singh Rajput. Gurjent Singh is the editor and Vivek Sharma is the choreographer. The film has been shot at many beautiful locations in Bundelkhand, Uttar Pradesh, Charkhari, Mini Kashmir, and Puranidevdi. If you want to watch musical, romantic and thriller Hindi films on the big screen, then Premaatur is a good option.