Pankaj Tripathi: “When I was going through the script of ’83’, I was in tears

Pankaj Tripathi: “When I was going through the script of ’83’, I was in tears 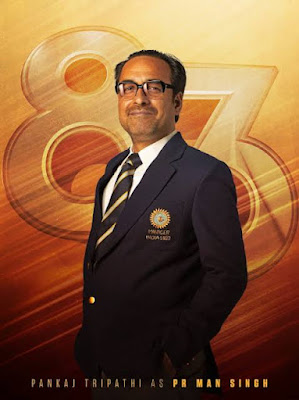 For Pankaj Tripathi and probably every actor associated with Kabir Khan’s ’83’ would vouch for the fact that the sports drama is not just a film but an emotion which they will cherish forever.
While the movie is set for its World Television Premiere on Star Gold on 20th March at 8pm, the versatile actor, who portrayed the role of PR Man Singh Ji, recalls his journey of being a part of greatest sports victory ever told on the big screen.
“Working on ‘83’ was an emotional ride for me even when I was going through the script. At some of the places, I was in tears,” informs Pankaj and elaborates, “I am really inspired with the whole journey of Kapil Dev and the entire team. I was certain that I wanted to be a part of this iconic film.”
“I play the character of PR Man Singh Ji. India knows the players but not him. There’s not much information available about him, but his hard work helped India to win the World Cup. I spent an entire day with of PR Man Singh Ji at his Hyderabad residence.
We were together from morning to evening, ate together and even saw his house. He has a personal cricket museum which is just fabulous. There is a room dedicated to cricket in his house.
He really loves the sport and has even written books on Hyderabad cricket. Glad that ’83 is coming straight from the theatres on Star Gold where India at large can catch the World TV Premiere of the movie with their family on 20th March, 8PM on Star Gold,” Pankaj adds.
Share196Tweet123Share49