by Dinesh Kumar
in Festival
Reading Time: 2 mins read
A A
0
491
SHARES
1.4k
VIEWS
Share on FacebookShare on Twitter 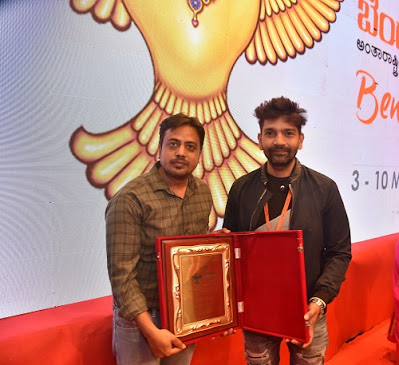 ‘Gandhi &amp; Co.’ was part of Film Bazaar Recommends 2021 List among many Asian films conducted by National Film Development Corporation of India (NFDC), Ministry of Information and Broadcasting, Government of India. ‘Gandhi &amp; Co’ was the only film from Gujarati to be part of FBR 2021 list as well as Biffes 2022.

‘Gandhi &amp; Co’ is a lighthearted Gujarati comedy film tells a story with a backdrop of Gandhian values of honesty and harmony in an entertaining way. This film is a coming-of-age family drama meant for family audience. Manish Saini who earlier directed National Award-Winning Gujarati film ‘Dhh’.

This is his second film as writer and Director. The film is produced by Mahesh Danannavar who produced Gujarati film “Shu Thayu?!” which was blockbuster hit under the banner of MD Media Corp “It’s my honor to receive an award from Governor of Karnataka, Being from Bengaluru my hometown and winning an award for a Gujarati Film where I belong, means a lot to me” Producer Mahesh Danannavar said after receiving an award from honourable Governor ofKarnataka Shree Thaawar Chand Gehlot along with the director, Manish Saini.

Director Manish Saini says, “We are busy in giving meaningful content the society and we are happy our efforts are being recognized at the festival, we hope that more and more people will watch the film and appreciate it.” KS Ramesh world renowned Magician and Actor who was part of the festival Jury says” This is the wonderful cinema which brings back lots of Nostalgia and Childhood memories. I loved the film and enjoyed every scene of the film. This film is brilliantly made, and I congratulate the entire team for their efforts”.

National Award-Winning Actor Darshan Jariwala who is part of star cast says, “This was the first International film festival for ‘Gandhi &amp; Co’ and winning an award is very special moment for all of us” As it already started receiving invitations from around the world so ‘Gandhi &amp; Co’ would be part of many forthcoming international film festivals across the globe this year. Director Manish Saini and Producer Mahesh Danannavar available for media quote and interview, please confirm on email, mobile.