by Dinesh Kumar
in Festival
Reading Time: 3 mins read
A A
0
491
SHARES
1.4k
VIEWS
Share on FacebookShare on Twitter 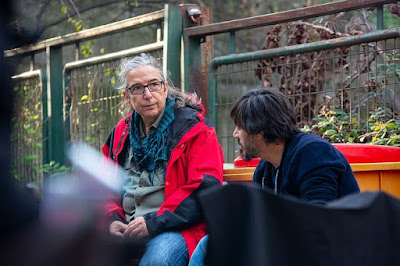 JAIPUR | Amidst worries and challenges thrown by COVID, the 14th edition of Jaipur International Film Festival successfully completed on Tuesday, with the screening of 22 films from eight countries. A total of 279 FILMS [off-line online screening] from 52 countries are screened in this five days going film festival. Despite the life-threatening COVID, 108 films were screened offline in JIFF, and filmmakers, producers, and star cast of 70% of films attended the festival.

Hanu Roj, Founder Director – JIFF, is super excited about the way he has got appreciation from filmmakers across the world. Hanu Roj told that in the beginning, he was a bit skeptical about organizing the festival due to COVID restrictions, but after receiving valuable suggestions and support from filmmakers, he got the festival done in hybrid mode [off-line and online]. Taking care of the COVID protocol, the award ceremony had to be postponed and awards were distributed at the opening ceremony itself. Thus, he asserted the strong will and conveyed the message ‘show must go on’ to the world.

Following the suggestions of the filmmakers from foreign countries, who could not make it to attend the festival, JIFF Committee has decided to organize the festival in two separate versions next year – online and offline. He told that the online version would be organized as the online edition only, where all those events would take place, which is conducted offline, as filmmakers and producers meet | film market meet | talk shows and special dialogues after film’s screenings. It would be helpful for those filmmakers, who are not able to participate in the festival and thus they would be able to watch and understand everything about the festival.

My film documents the ongoing pain of my mother-in-law Sadan Hanim during her disease of Alzheimer’s and her moments of gradually losing memory. This difficult time was hard to be documented and shot and it was harder to get sponsors and now I am proud to say that our film was not merely screened at Jaipur International Film Festival, but it has won many awards as well. Literally saying, my experience at JIFF has been amazing. Such festivals are very significant for filmmakers and producers as it opens doors for global cultural exchange.

I have not done any formal course for filmmaking but was super enthusiastic about Cinema since childhood and my passion has drawn me to films eventually. From the beginning, I feel amazed to be connected with Jaipur International Film Festival. As JIFF is progressing, Jaipur is considered the cultural capital of the country hitherto and now it’s going to be film capital for sure. The success of a film festival lies in the way it enhances global film culture and spreads new ideas of independent filmmakers towards audiences and JIFF has achieved this completely.

JIFF has become a statement

I see it as an achievement to express the pathos of women through my film and receive support from other women in the process of filmmaking. I am delighted to have my film screened at Jaipur International Film Festival and amazed by the way, the festival has taken place following all the COVID protocols. The way JIFF is stepping ahead every year, Hanu Roj deserves huge appreciation. JIFF is not merely a film festival now, it has become a statement.