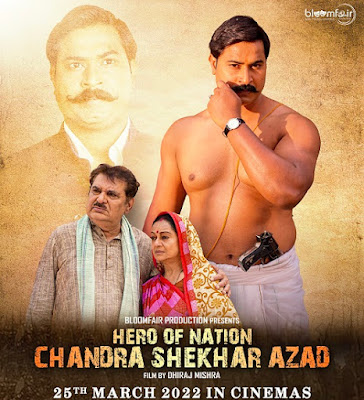 Mumbai, 10th March 2022: Trailer of Hindi movie “Hero Of Nation Chandra Shekhar Azad” is out ! Trailer seems promising, covering the revolutionary moments of Azad’s life. Ahmad Kabir Shadan had pulled off the character of Azad fantastically. The dialogue delivery and the actions shown in the trailer suits the characters of the film. It’s been a long time, the Genz will watch a film based on the freedom-fighter. Raja Randeep Giri and Dhiraj Mishra are successful in bringing the era of 1920s on silver screen.
The crux of the film is based on the Chandra Shekhar Azad ties and bondings with family and other revolutionary freedom fighters . Also portrays the versatility in the characters life .Veteran actress Zarina Wahab will portray the mother of Azad and Ahmad Kabir Shadan in and as Chandra Shekhar Azad. Raza murad as Sitaram Tiwari father of Azad .Riitu Sood as Durga bhabhi (India’s first female freedom fighter)
Chandra Shekhar Azad has been a leader in the freedom revolutionary movement of India, along with Bhagat Singh he created a revolutionary organization and gave a tough challenge to the British. After the arrerst of Bhagat Singh and due to some inside traitors, his organization got disintegrated and till his last breath, he continued to contribute to the freedom of the country.
Azad’s life was full of mysteries, very little information is available about his personal life through his fellow revolutionaries and books written by them about Azad .The film Chandra Shekhar Azad will introduce us to the noteworthy person from Azad’s life like his mother and revolutionary Durga Bhabhi, Vishwanath, as well as the personalities of Azad’s father Sitaram Tiwari and mother Jagrani Devi.

Produced under the banner of Bloomfair production, co-produced by Jasbir Singh, Anurada Gurpur Bhatt and Trannum, directed by Dhiraj Mishra and Darshan Kumar Sant, written by Dhiraj Mishra and Yashomati Devi. Zarina Wahab, Raza Murad, Ahmad Kabir Shadan, Pradeep Kabra, Riitu Sood, Puneet Agarwal, Kavita Thakur will be seen in major and important roles. The wait will be over, as   the film will hit the theatre on 25th March 2022.The music has been released by Zee music.