Empowering Women’s Award 2022 will be organized in March

Empowering Women’s Award 2022 will be organized in March

by Dinesh Kumar
in Awards
Reading Time: 2 mins read
A A
0
491
SHARES
1.4k
VIEWS
Share on FacebookShare on Twitter 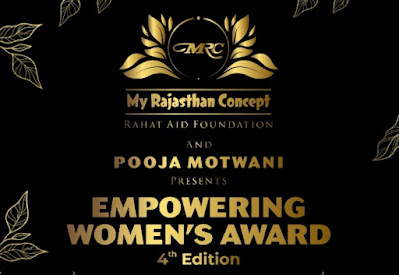 The 4th edition of Empowering Women’s Award’ 2022 would be conducted in 2 cities, Delhi and Jaipur. The event would be held on 6th March and 3rd April, respectively. The awards are presented by My Rajasthan Concept and Rahat Aid Foundation. Empowering Women’s Award is an initiative taken by Pooja Motwani to honour appreciable work of women from different sector.

Shri Ram Niwas Goel who is the Speaker of the Delhi Legislative Assembly will be the chief guest for the awards. The event would be curated by Pooja Motwani, herself.

Pooja Motwani is a well-known fashion designer, Make-up artist, and a social activist. She works for different social causes and is known for providing empowerment to women and creating a platform to showcase different talents and skills.

The awards are organised with the motive of encouraging and appreciating people who are achieving hights in their career with their hard work and are becoming inspiration for others.

People of different professions like doctors, teachers, life coaches, astrologers, entrepreneurs, make-up artists, speakers, and social activist etc. can apply for the nominations if they believe their work should be recognised by the society. Note that the last date of nomination is 2nd March 2022 and the participants would have to provide their profile with basic information, experience and photograph of themselves.

Many renown personalities of Delhi including Shaloo Jindal, Rita Gangwani, Swati Mehrotra, Seema Gumber, and Sandeep Marwah would be a part of this award show as a very important guest.

The venue for the Empowering Women’s Award 2022 would be Afolabi Kitchen & Sky, Delhi and Asteria café, Jaipur.

Previously, the 3rd edition of Empowering Women’s Award was done along with the theme #HeforShe in March’2021 in which awardees from 15 cities and 2 countries were present. Couple Tanaz Irani and Bakhtiar Irani were the celebrity guest for the event. It was to indicate the idea that ‘every woman has an essential role and contribution in the life of a man.’

Second edition of the prestigious HELLO! India Art Awards was held in the capital city on Sunday (February 5), honoring...

Capital Region Urban Transport (CRUT), the pioneer Transport Authority of Odisha will be getting yet another international recognition on 8th...

The multi-award-winning campuses of The Green Acres Academy (TGAA) at Chembur, Mulund and Kalyan, have begun accepting students for the...

On the 5th of February, 2023, the team of Dadasaheb Phalke International Film Festival Awards joined Cause Partners Eka Foundation...