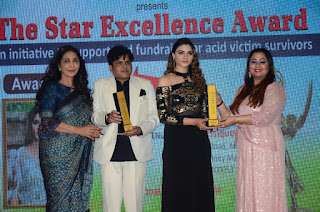 Enough has been talked about big-budget full-length films picking up prestigious awards. But now the time has come for short films. Thanks to the Best Short Film category introduced in many awards, many new-age filmmakers are getting the due credit for their creativity.
Indian director Chandrakant Singh who recently shot the Short Film ‘Parchaaiyaan’ won the best Short film Award at The Star Excellence Award held in Mumbai. Now the many award shows are finally highlighting the beauty of short movies. Director Chandrakant Singh and beautiful actress Sezal Sharma received the award.
Director Chandrakant Singh Said, “I’m very Happy to receive this award. I would like to thank my team and brilliant actors who gave outstanding performances. I don’t know what to say. You all can see I’m completely overwhelmed and feel so blessed. These awards mean everything to me right now”.
The film ‘Parchaaiyaan’ is tribute to the most celebrated lyricist, who gave Indian cinema a new direction and whose story is an inspiration for younger generations. In his lifetime, Sahir was awarded multiple Filmfare Awards for his work in movies like ‘Taj Mahal’ and ‘Kabhi Kabhie’. His super hit songs in classic films like ‘Pyaasa’, ‘Naya Daur’, and ‘Phir Subah Hogi’, his work is truly exemplary.
The short film ‘Parchaaiyaan’ features very talented actors Tanuj Virwani, Sezal Sharma and Hemant Kher.
Share196Tweet123Share49