Vaarun Bhagat explains the values of being from an Air Force background, wishes everyone a Happy Republic Day

by Dinesh Kumar
in Bollywood
Reading Time: 3 mins read
A A
0
491
SHARES
1.4k
VIEWS
Share on FacebookShare on Twitter 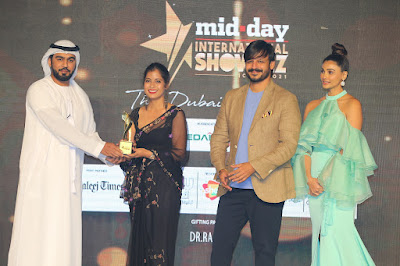 Anamika Shukla hailing from Kanpur, Uttar Pradesh has been recently awarded as Iconic Female Actress for Mukesh Jasoos at the Mid-day International Showbiz Awards 2021 in Dubai. She has been felicitated by Vivek Oberoi in the Mid-day International Awards event which has been held in Grand Hyatt Dubai on 25th September, 2021 evening. Many Bollywood celebrities were present at the award ceremony like, Vivek Oberoi, Neha Sharma, Aditi Rao Hydari, Daisy Shah, Zarin Khan, Siddharth Kannan and many more.

Few months ago, Disney plus Hotstar released a dark-comedy web-series Mukesh Jasoos, in which Anamika Shukla played a key role named Pooja, who is a very mysterious girl. Anamika enters in this series from episode 7 and remains till the end. The moment she enters, Muktaram falls in love with her in the first sight. Muktaram has been played by Paritosh Tripathi aka Super Dancer Host Mamaji.  She brings many twists & turns in the story. After the release of Mukesh Jasoos, Anamika gained popularity and praises from the critics for her enticing performance in the series.

A girl with a non-Bollywood background, with big dreams in her eyes, moving from a small city to dream city Mumbai, and achieving goals after years of hard-work is a dream come true story.

After felicitated as the Iconic female actress by the Mid-day International Showbiz Awards, Anamika says, “I love to perform different and challenging roles and since I moved to Mumbai, this city gave me hard time but also many opportunities. 2021 is the best year for me so far. Director of the series Heena Dsouza gave me the chance of playing Pooja in Mukesh Jasoos, which is a very greyish character with many shades. I am truly grateful to Mid-day for felicitating me with Iconic Female Actress Award. When I was receiving the award from Vivek Oberoi in Dubai, that was a proud moment for me and for my parents too. In that moment, every hardship I faced in the past felt worth. I am really thankful to Mid-day, Humara Movies, Disney plus Hotstar and all the people for loving and supporting my work”

Her journey from Kanpur to Mumbai was not easy. In 2011, Anamika Shukla moved from Kanpur to Lucknow and then Delhi in 2013 and finally moved to her city of dreams ‘Mumbai’ in 2017. In this long journey, she learned and did lots of acting projects. She has done many films and web-shows for different OTT platforms, like she did a zee5 feature film “Pakhi” as protagonist, a lady-cop in the Rohit Shetty’s blockbuster film Simmba, Deadly women show promo for Investigation Discovery Channel, Dil Dosti Daftar YouTube web-series with Imperial Blue, Short film Mannat on Hotstar, and many more.

Anamika Shukla says that she visits Kanpur every year to be with her family and she misses her school and graduation days in Kanpur, when she used hangout with friends and eat street food.