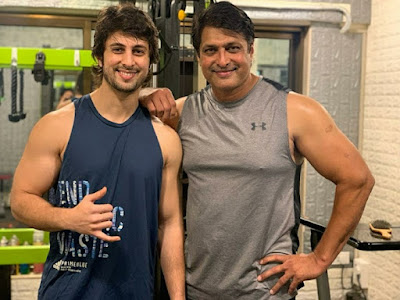 Actor and former cricketer Salil Ankola has impressed us over the years, and it seems like his son, Karan Ankola, is all set to follow in his footsteps. The senior actor opened up about how his son is getting work ‘through his effort’ and how he doesn’t need his papa to recommend his name to anyone.
When asked as to why he didn’t launch his son, Salil says, “Sham (Kaushal) paaji has been one of the top action directors in Bollywood for more than three decades. Despite this, his son Vicky Kaushal had to wait for a while to get his first break and then another 4-to 5 years to get a big film like Uri: The Surgical Strike. When you achieve success after struggling for it relentlessly, you feel proud of yourself. That’s the reason I want my son to go through his journey without my backing.”
While praising his son for his discipline, focus and dedication, the actor also got candid about why he didn’t take the initiative to launch his launch, “I don’t launch my son because I want him to bag a role of his talent and I am very happy that his efforts are always getting noticed and appreciated.”
Meanwhile, Karan is getting many offers that came to him, but he wants to do something interesting. He has to ensure offer the audience something worthwhile like with wider visibility of work. Along with sweating it at the gym, Karan Ankola also opts for Martial Arts to maintain his body and stay fit, testimony of the same could be witnessed on his social media.
Share196Tweet123Share49